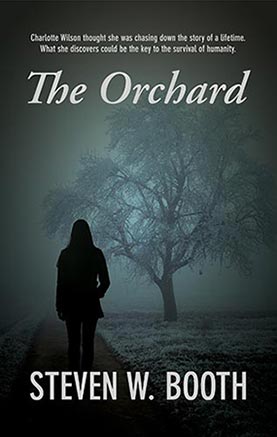 Charlotte Wilson is an investigative journalist reporting on a global pandemic that seems to have no identifiable cause. When she is contacted by the COO of a multinational biotech company claiming he has the answer to what's making people sick, Charlotte and her producer Nick start dreaming of Pulitzers and national syndication.

But as she begins to uncover the truth, Charlotte discovers she is at the center of a conspiracy that is 12 years in the making, one that touches every part of her professional and personal life. Millions of lives depend on her breaking the news, but the story is so big, will anyone believe it? Charlotte may not live long enough to find out.

Steven Booth's The Orchard is many things - an intriguing mystery, an intense suspense tale, a terrifyingly plausible bio-thriller - but overall it's just plain great. Pick it up at your own risk. You'll be in its grip from the first page to the last.and thinking about it long after you put it down.
—Steve Hockensmith, author of the Holmes on the Range mystery series and The White Magic Five and Dime